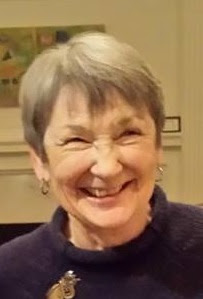 "I'm very low key," Judith said. "I don't market and I've never asked for a review. It seems to me that word of mouth helps sales the most and I hope my novels are interesting enough to warrant readers passing the word along."

The one independent bookstore in Pendleton where she had sold books, closed this year.

"I suppose I could take some books outside the area. I haven't explored that possibility because I don't travel much. However, I do sell my books at the Pendleton Center for the Arts at 214 N. Main Street, in Pendleton. The Art Center is generous and only takes 30% of each sale.

I lived on the Reservation for years, and now I’m a couple miles south of it.

Two things helped me decide to self-publish. 1.) I had no luck finding an agent. One publisher expressed considerable interest. However, I withdrew the manuscript when a year and a half slid by and my followup letter asking for the status of my manuscript was not returned.

I wanted readers. If I only sold fifty copies that's still fifty more than if the book stayed in my computer.

I donate books to the three libraries in the area. Libraries have, and still do, sustain me. For years, my budget didn’t stretch to buying books. Now that has changed-but I know there are many people who can’t afford to buy books and rely on the library for most of their reading. In fact, the Pendleton Library has invited me to read from A Creek Named Sorrow on December 1, 2016, and they're handling venue and advertising."

Judith Kelly Quaempts lives and writes in rural eastern Oregon. Her books are available in Kindle and paperback at Amazon. Her short stories and poetry have been published online and in print, most recently in Crafty Poet II, Windfall, A Journal of Place, Young Ravens Literary Review, and The Poeming Pigeon.
Posted by * * * * * * * * * * Mona * * Leeson Vanek at 9:05 PM No comments: