The 23-Month Pregnancy of "Kill All Cats" by Rick Bylina

How did Rick Bylina remain dedicated for nearly two years to completing and publishing "Kill All Cats"?﻿﻿﻿﻿﻿﻿
As you read Rick's guest blog, pay attention and you can pick out the salient points that kept him writing as he relates the growth of Kill All Cats.

THE TWENTY-THREE-MONTH PREGNANCY
By Rick Bylina
I knew the moment my pregnancy began.

On June 26, 2014, at 4:33 p.m., the lamenting had reach fever pitch in a private authors-only Facebook group about the lack of our book sales and the banning of books. My mind darkened to match the stormy skies outside. Creative thoughts sparked my fingers. Charged, they skittered across on the keyboard. "I’m going to write something so horrific that thousands will ban it and millions will buy it to protest the banning."

I like animals but couldn’t abide the cat stampede. I groaned. Then, I gripped the arms of my chair as all the synapses in all the corners of my engorged brain erupted with spasmodic writer euphoria. Idea penetration had been achieved. I gasped as my brain cells formed the story idea zygote about an isolated man, telepathically controlled by a cockatiel, who goes on a wild killing spree to rid the world of cats. My oblivious cockatiel slept on my knee at that moment, at least, I think he slept.

My twenty-three-month gestation conundrum had begun.

I had to accept my limitations as a writer based on my experience, ability to research, and personal tastes; I needed to stretch my boundaries to create a break-out novel. I wanted a noteworthy book, especially when I could envision a rich story complete in every element of style. I revised and feed the story language that reflected aspects of great writing that I had learned about and honed over the years. I saw the language didn’t need the verbs “was” and “were” to be vibrant, thoughtful, and intriguing.

I fleshed out the plot organically and revised as needed, looped-back on touchstones, hid clues in plain sight, and gave each character achievable goals and the motivation to go after them. I relived the thrill of idea conception as each new chapter grew, and I remembered to stay true to the core story idea.

The need to strengthen the motivation of the protagonist, Ron, arose. I gave him a horrific background to make his nature understandable and provide him room to grow and mature, or fall into a meaningless life. I added humor as his cockatiel, Brisbane, morphed from a malevolent bird to a humorous sidekick, blissfully parroting appropriate clichés from crime shows and movies, which he watched 24/7. I made Ron and Brisbane co-dependent in a way that only someone who had faced despair could truly understand and then made the emotion available for all readers.

I added intrigue, but the story needed more. I erected the pillars of romance for Ron as I tightened the screws to his situation, building his strength and knowledge for the final showdown against a host of powerful villains and gut-check situations. Endless editing, constant rewrites, alpha and beta reader comments, editorial face slaps, cover design hiccups, production deadlines, and executing the marketing plan followed.

Twenty-three months after conception, I gave birth to Kill All Cats, a novel unexpectedly beautiful in my eyes, and I hope in yours.

Rick Bylina
The only rule: Writers write! Everything else is a guideline.
Rick has been a member of Internet Writing Workshop for many years, and is well known and beloved for the unstinting support and encouragement he gives to fellow IWWmembers and for his advice, and delightfully unique sense of humor.
I'm Rick the author man
I write all the words I can
I shuck the adverbs
Embrace power verbs
I'm Rick the author man.
Kill All Cats was the featured book July 8,2016 on the North Carolina Writers' Network, (4,000 members strong) BOOK BUZZ site.

Mel Jacob's review of Kill All Cats is up at Gumshoe Mystery Review.

Mark Kline, a long-time member of Internet Writing Workshop, translates books, so I asked him for a guest blog on the topic that writers will be sure to learn from. It may be a good venue for you.

"It felt like a natural step for me to start translating literature. I've always loved reading fiction; I'd been living in Denmark for about twenty years, and I spoke and read Danish every day; I'd started writing short stories (in English); I've always liked working closely with others on projects. And I thought; why not give it a shot?
"I read translations and practiced translating. Then I contacted a somewhat unknown writer whose work I admired. Like most writers – as I've discovered – she was pleased that someone was interested in translating her work, and she was glad to help. I translated a few of her stories and sold them. It was thrilling to see they worked well in English – but how did it happen? It seemed almost like magic.
"Even now that I'm used to it, it can still seem a bit magical, though there's much routine involved. Reading a Danish story or novel, then starting in on it, translating the first sentence, the second, the third, until I reach the end. Then going back and thinking about words and paragraphs, approaching the work in smaller and larger bits, reading it at different 'distances.'
"It's somewhat like writing, except I always have to keep an eye on the original. It's push and pull, a constant stream of questions, usually resolved within seconds but certainly not always.
Questions such as:
"One way of looking at translation is that it's a series of dilemmas, many of them similar to those writers face. But translation dilemmas have more dimensions. For example, there's a golden rule: thou shalt not improve what you're translating.
"It's constantly in the back of my mind. But how do you define "improve?" Tricky!
"There are also many loyalties to juggle around – the people who will be reading the English translation, the author's wishes, the original work itself, whoever is paying.
"Another dilemma, maybe the biggest one of all – you have to write like other writers do, in styles that may not come natural to you.
"A sort of impersonation act. Maybe translators are like character actors?
"I was lucky. The first writer I translated many years ago became very popular, and through her and her publisher, I started picking up jobs. Gradually I became a full-time translator of literary fiction, poetry, crime novels, cookbooks, memoirs, journalism, alternative educational theory, videos on accordion repair – the strangest job I ever had was writing a report on a book by a Norwegian philosopher whose sentences averaged out at five pages in length.
"I can't say I've ever had a job that wasn't interesting in some way. The translations I'm happiest with don't necessarily come from books or writing I greatly admire. I still think about a short story I translated ten years ago. And a few poems. The beginning of a crime novel I translated last year.
"If you're thinking about trying your hand at translation – assuming you're fluent in a foreign language – I have a few simple tips:
"If you find you really enjoy translating, there are plenty of universities offering programs you can look into, for example: Center For Translation Studies.

"They have to be."
"Kingsize, by Mette Moestrup, is among my latest translations. Stephen Burt, said in Yale Review, "It might be no surprise that we live in a great time for avant-garde work in translation. And yet it's still surprising to see translated poems that depend on a spoken voice, on intonation and attitude, working in English almost as if they belonged there: that's the pleasant surprise – and sometimes the shock – of the Danish poet Mette Moestrup's Kingsize …"

"I also translated The Last Supper, by Peter Wivel. Paul Berman, author of Terror and Liberalism and The Flight of the Intellectuals, said, "Klaus Wivel's report on the persecuted Christians of the Arab world is vivid, precise, morally astute, heartbreaking, and infuriating."
"I finished an unusual translation recently. It's on a wall at the  National Museum of Art in Copenhagen, which is a place I never imagined anything I ever had anything to do with would be.

"I had to translate the poem so each line and the poem as a whole took up almost the same number of words, characters, spaces, to give a mirror effect on the wall, the original and translation side by side. the poem was written for an exhibition of the Danish painter, Hammershoi.

"My translation of Sara Blaedel's crime thriller, The Killing Forest was published earlier this year by Grand Central Publishing.

"And finally, a story of mine, Ghosts That Never Lived, is in the spring 2016 issue of the Tulane Review, the litmag published by Tulane University.


Mark Kline grew up on a farm in the Flint Hills of Kansas. He now lives in Copenhagen, where he translates and writes short stories. He loves watching jazz from the side of the stage, crooked hedgeposts, baseball, old town barcelona at midnight, grandkids anytime anywhere, his eclectic taste, bees in lavender, informality, the summer we hitchhiked, playing bluegrass, fiction so great it makes you want to live in it, and hollyhocks and zinnias. He hates traumas, tight clothing, his childishness, nationalism, handicap toilets you have to walk downstairs to get to, canned spinach in vinegar, and privilege.
Posted by * * * * * * * * * * Mona * * Leeson Vanek at 4:09 PM No comments:

Lynne M. Hinkey's Latest Novel: The Un-Familiar: A Tale of Dogs and Demons

On the first of June, 2016, Lynne M. Hinkey's third novel, The Un-Familiar: A tale of Dogs and Demons, was released by independent publisher, Casperian Books.  It is the second book in her Chupacabra Trilogy. 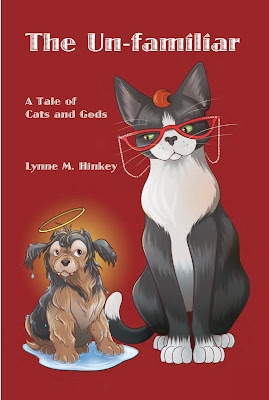 Three years ago, I posted Lynne's guest blog, Partnerhip Publishing ~~ Is It Right For You?

Marina Melee, on Amazon, was released in 2011 by  Casperian Books. Lynne had recently signed a contract with Casperian for her second novel, Ye Gods! 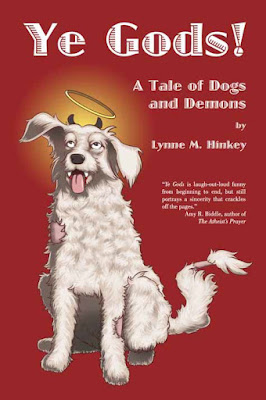 Read what Bob Sanchez said on his blog  about Lynne Hinkley, who is a marine biologist, animal lover and nice person.