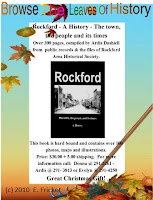 
If I were forced to choose a one-word description for Rockford: A History, impressive is an apt overview for this recently released regional history about the Palouse in southeast Washington State.

Compiled by Ardis Dashiell, who has lived in the Palouse for sixty-five years, took upon herself the daunting task of preserving its past.

Two thirds of the original print run of 300 copies sold out within days, demonstrating that Rockford: A History has an audience.

Ardis, the white-haired wife of a rancher always has a ready smile, She says of herself,


"I'm a quilter, genealogist, and now a historian I guess. Being a longtime resident of the area helped tremendously."

Her ability to piece together a masterpiece isn't limited to fabric. Stories and documentation in Rockford: A History clearly paint colorful pictures of homesteading and development in the area comprised of rolling plains cleft by deep basalt canyons and surrounded by low mountain ranges.

Like many regional histories, Ardis' well-done book is a labor of love. Uncounted hours of devotion transpired before this valuable record of bygone days made it to a printer and bookbinder.


"I learned more than I anticipated," she says of the research and tasks involved in writing a local history book. "It took me twenty years."

Profiles of the town's founding fathers (*) businesses, schools, churches and families create the saga of a growing community. Like scores of other early towns, hardy settlers battled and conquered the challenges of devastating fires and floods.

Creation of the Coeur d'Alene Indian Reservation is among the many biographical sketches contained in the book. The photograph on page 127 is meaningful beyond words. It captured the mien of thirteen tribal members just after "they had been to Coey's Bank to receive the first major payment of one half million dollars which was paid to individual Indians..." Twelve of the recipients of the distribution of Federal money are named.

Almost inevitably, the photographs, which include images in local historical society files, do not identify the photographer. Also omitted are addresses for early-day schools, churches, and of far too many businesses that no longer exist. Nevertheless, the old images convey a priceless intimacy to Rockford: A History, and include a wealth of remarkable insights into the past.

Gaining a wider audience for the hefty volume will take time. But sooner or later some readers will tweet or post on Facebook or another social network about Dashielle's book. Then, like the windstorms that frequent the Palouse and waft its topsoil to distant regions, word of this impressive saga of the olden days will spread.

One caveat, however, is that the publication lacks a ISBN, which means this valuable book will be available in only a few libraries.

This is Dashiell's third book. Her first, a tribute to her mother was limited to copies only for her immediate family. Her earlier major book is a large hardbound history of Mount Hope, Washington. Once a thriving nearby town of over 800 souls, time and circumstances have reduced it to a wee hamlet comprised of a few buildings.


"I imagine a second edition will be ordered before long."

Your kind praise is welcome as well as gratifying! Thanks! Mona